What would happen if you made a one percent improvement in your business every day for a whole year? 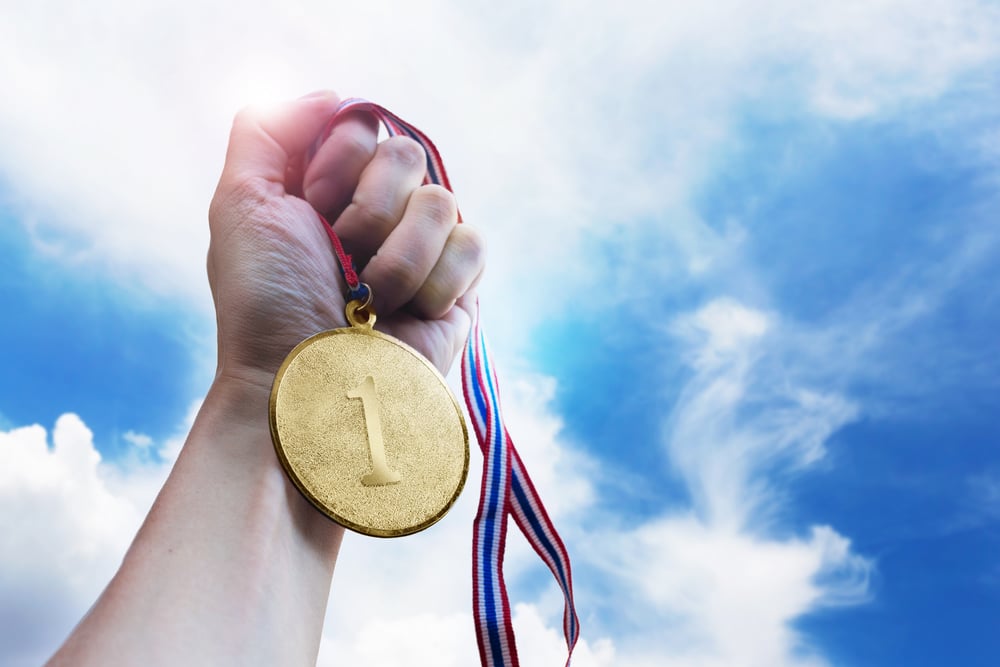 In previous posts, I have written about finding the “one-percenters” in your organisation – the things you can tweak in your business systems to make continual, small improvements. Hopefully you have already started identifying some of these. I know that some readers will have thought to themselves, “How can a one percent change make any difference to my business? That’s such a small improvement – nobody would notice”. And they would be 100% wrong.

Supposedly, the physics genius Albert Einstein named compound interest as the most powerful force in the universe. The story is most probably apocryphal, but the sentiment certainly is not. The principle of continuously building on small improvements doesn’t just apply to money. At the beginning of your improvement journey, it may seem that nothing is happening, and this is the main reason you will encounter resistance. People can’t see the impact at the beginning. As time passes though, each small improvement builds on those that came before, and the long-term effect is substantial.

What would happen if you made a one percent improvement in your business every day for a whole year? 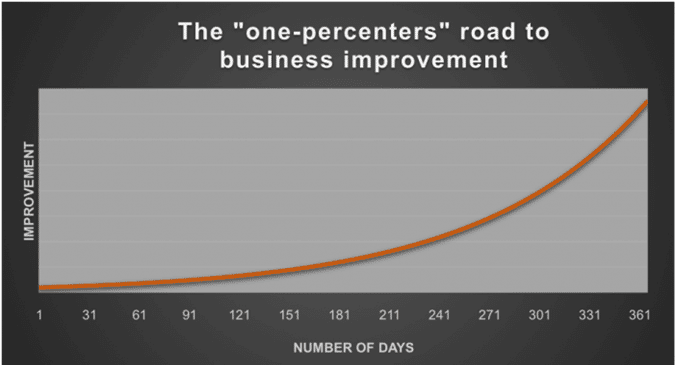 Who wouldn’t want that level of improvement in any area of their business?

What your business can learn from the Great Britain Cycling Team

If you follow sport at all, you will know that the British cycling teams have made a big impact on the international stage over the past few years.  Who could forget the epic battles between Australia’s Anna Meares and her British rival Victoria Pendleton? At the 2012 London Olympics, Team GB won 70 percent of the cycling gold medals, and British cyclists came first and second in that year’s Tour de France. Another Brit won the Tour again in 2013.

Yet, prior to 2012, no British cyclist had ever won the Tour de France. How did this happen?

The secret of their success was that their coach had whole-heartedly embraced the “one-percenters” concept. As a team, they searched for every little gain they could make – including taking their own pillows and bedding to competitions so they would sleep better.

Success in business as well as sport

General Electric, the US-based industrial giant, started an event in 2015 called “Unleashing the Power of One Percent”. If you don’t believe that such small changes really can have such a large, cumulative effect, note what GE’s Executive announced at the event:

“By unlocking the power of one percent, businesses will be able to enjoy greater savings and efficiency, by just making small changes to the way they do things,“ he said.

“For instance, a one percent reduction in fuel will see US$30 billion in saving for aviation companies and a US$66 billion saving in energy costs for power producers.”

But if you’re only looking for little things, what happens to your big, hairy, audacious goals?

As business owners we all know the importance of goal setting. We have also been told to set some so-called Big Hairy Audacious Goals (BHAGs) for our own businesses, which tend to be highly ambitious goals for 10-30 years into the future.

Interestingly, it was another GE leader, former CEO Jack Welch, who exemplified Big Hairy Audacious Goals. Welch declared that GE would be either #1 or #2 in their product categories, otherwise they would stop competing in that category. And he achieved that goal.

But how can GE, or anyone else for that matter, strive for those big-picture BHAG’s on the one hand, and concentrate on tiny one-percent improvements on the other? How can you maintain focus on the big picture while “sweating the small stuff” and looking for those tiny gains?

Aren’t these two in conflict? Well, not necessarily.

The key is to ensure that the tiny improvements you make all contribute to your critical success factors. This simple rule connects your BHAG and the everyday search for small improvements

Let’s look at the British cycling team again. (Note that the diagram below is purely hypothetical, as I know nothing about training athletes or cycling) At the centre is the BHAG, which is to win medals and the Tour de France title. These are surrounded by the critical success factors for achieving that goal, and then by the one percent improvements that will lead to success. 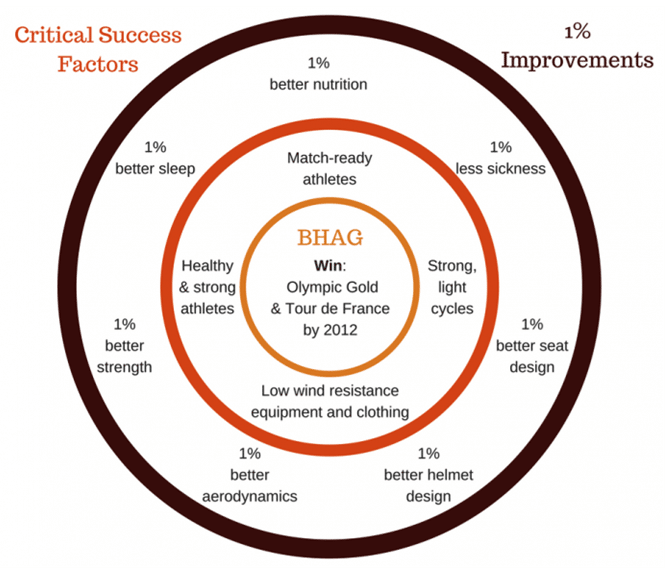 After failing with their initial improvement attempts, the “one-percenters” worked miracles for the British cycling team. In the words of the coach:

We took an honest look and realized that we had focused on the peas, not the steak. … We tried so hard with all the bells and whistles of marginal gains that our focus was too much on the periphery and not on the core … You have to identify the critical success factors and ensure they are in place, and then focus your improvements around them.

So the beginning of your one-percenters journey is to first identify your steak. Be clear on your BHAGs and the critical success factors that will help you achieve them.

Then go looking for the peas.